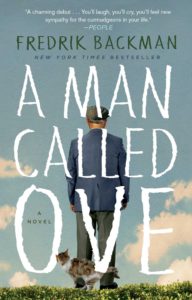 Happy May everyone!  I hope you are enjoying some beautiful spring weather; maybe even a little time to sit outside and read in the sunshine.

I know I have asked you all this before, but do you have a favorite book that after you finished it, the story and characters hung out with you for awhile?

A Man Called Ove by Fredrik Backman is one of those books for me.  Ove wiggled his way into my heart, and is still sitting there.

Maybe the story hangs with me because some of his personality traits brought back memories of both of my grandfather’s, maybe because we all have known or have a curmudgeon in our families that we don’t completely understand, I don’t know.  All I know is that I hope you will pick up this book and read it.

A Man Called Ove is a brilliant, sometimes funny, heartwarming story about a cranky, tough, rough around the edges curmudgeon.  Ove lives his life exactly the same everyday with the same routine, the same meals and dinner is meat and potatoes.  He lives by the rules and isn’t afraid to tell you that you’ve broken the rules.  Ove gets up every morning, has his coffee and breakfast, walks his entire neighborhood of row houses checking for anything out of the ordinary.  He doesn’t much like people and stays to himself, but why?  Has Ove always been like this?  For him there is no gray, life is black and white.

Ove lives in Sweden, drives a Saab and if you drive anything other than a swedish car, he has no use for you.  Life for Ove is lonely….until a young family moves in next door, driving where they aren’t suppose to drive in the community when they run over his mailbox.  Ove is outraged and tells them so, but has Ove met his match with the woman of this family?

Throughout the book, Ove’s life is leaked slowly to you and you learn more about this complex man.  His very brash exterior really turns people away, has ruined friendships, but yet they push back and you wonder if anyone can crack through to his soul.  The neighbors and friends that he has pushed away, continue to worm their way in and Ove discovers what is important in life.

This book had me laughing and then crying.  Not wanting to put it down, but putting it down because I didn’t want it to end.  A Man Called Ove is a touching story of one’s life and the impact one cranky curmudgeon has on the lives of those around him.

Fredrik Backman is a blogger and columnist based in Sweden.  A Man Called Ove is his first novel and it made it to the New York Times Bestseller list.  The book was originally written in Swedish and has now been published in 25 languages.

There is a movie which has just been released and I have the opportunity to see it tomorrow night through a film society.  Keeping my fingers crossed that it sticks with the book and simply brings the book to life.  I will let you know how it turns out.

We had our book club get-together last night, dining on meat and potatoes as Ove does in the book, discussing in depth the significance of each character and how they impacted Ove’s life as well as Ove’s story.

I really encourage you to read A Man Called Ove, I believe it will really touch you and stick with you for a while.  Please let me know what you think after you have read it.  I hope you love it!

PrevPreviousA Moment in Connemara; An Irish Love Story by Annie Quinn
NextSafari; A Memoir of a Worldwide Travel PioneerNext

2 thoughts on “A Man Called Ove by Fredrik Backman”