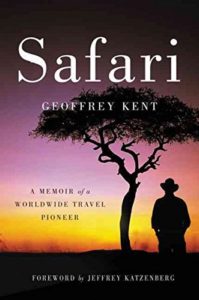 Safari; A Memoir of a Worldwide Travel Pioneer

Safari; A Memoir of a Worldwide Travel Pioneer by Geoffrey Kent is a well written book by the brilliant businessman who with his parents created and built the luxury travel tour company Abercrombie and Kent.

I don’t typically review travel books on the blog, but this one I really want to share with you.  If you are a an armchair traveler, you will enjoy the stories.  If you are looking for an adventure and inspiration to get out to somewhere new this book will do that for you.

Safari is not only a book filled with many of the adventures of Geoffrey Kent as he has traveled the world creating and building unique and one of a kind journeys for clients, but one of a man’s dream to build a luxury tour company that gives people something new and different.  He started with virtually nothing and drained his parents accounts to buy the supplies necessary to start his first African Safari.

Not only does he tell of the African Safari trips, but his worldwide travel, building a business and his personal life. While building a camp at Chief’s Camp,  he goes to bed and is suddenly awakened by the load noises of an animal nearby.  He climbs out of bed to see a hyena chewing it’s way into his tent to get at him, scared and panicked he throws items at it and ultimately he chases it off.  The story raised the hair on my arms, it was so vivid I felt I was a silent observer in the corner of the tent.  His adventures flying over Iguazu Falls, backcountry trips into Alaska and his encounter with David Niven as he was in Egypt filming Agatha Christies “Death on the Nile, bring you along as though you feel you are seeing it with him.

Geoffrey is lucky enough to board the paddle-wheeler, Karnak as it is called in the movie, outside of the movie it is the SS Memnon, owned by a wealthy Egyptian man.  He loves the boat and contacts the man who owns it to enter into a business contract to start offering his clients cruises on the Nile before they were popular.  The first trip is a disaster with no working toilets and smoke billowing out filling the boat.  Geoffrey offers his clients refunds and flights home, promising them that when he irons out the kinks, they are first to travel with A & K again.

Safari brings you along on all of his travels around the world without having to leave your home if you choose.

Yes, he does do some name dropping of celebrities and dignitaries that he has traveled with.  To some it may be a little off putting, but for those without that type of travel budget it is fun to see how the other half travel.

After Princess Diana’s tragic death, Prince Charles asks Geoffrey Kent to plan and take Prince Harry on another safari.  Hoping to help him death with the tragedy in his life, he plans the perfect trip and brings much joy to a brokenhearted young man.

Abercrombie and Kent is a company concerned about the environment and Geoffrey Kent has worked tirelessly to not leave a footprint in the areas they travel and he has created animal refuge’s in Africa.

After reading the last page, I was inspired to pack my bags and just go, get out there and have another adventure.

The most important effect of travel is that it does in fact change a person’s life and their perspective on the world.  I don’t think he could have said any better.

If you choose to read the book, I hope you are inspired or at least love the travel adventures.  I am grateful he was encouraged to write the book and chose to share his passion with the reader’s.

2 thoughts on “Safari; A Memoir of a Worldwide Travel Pioneer”