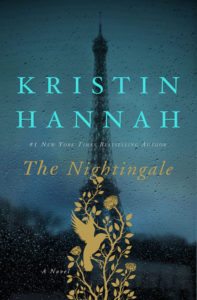 The Nightingale by Kristin Hannah

I stumbled upon Kristin Hannah’s books several years ago when I chose Home Front for book club.  If you haven’t read it, grab it or add it to your list, it really is a book you can’t put down. It deals with a woman in the military suffering from PTSD which is very prominent in today’s world.  Over the years, I have enjoyed more of her books; I can honestly tell you there isn’t one I haven’t loved.

When November’s book club book was chosen and announced, I was thrilled to hear it was The Nightingale, by Kristin Hannah. You must add this one to your list too.

The Nightingale is set in France at the start of the war.  In the first pages, you get a glimpse into an old woman’s life, while her son is helping her to move into an assisted living facility and you wonder what is her story?

Roll back time to life in Paris and a village outside of Paris,where two sister’s live. They have seen a lifetime of hurt.  Viane is married and raising her daughter in the family home outside of the city.  Hannah on the other hand is the wild child, she has been kicked out of different school’s, runaway and is just hard to handle.  The girls lost their mother at a young age and their father really didn’t want to raise them as he tried to deal with his own grief.  The girls are bitter and resentful and their relationship has suffered deeply.

The war is coming full force at them, the Nazi’s are advancing on the city and the villages.  Viane’s husband is heading off to the front line and Hannah is making her way back to her childhood home to be greeted by a father who doesn’t want her around.  As the war begins to rage, Hannah’s father sends her to live with Viane.  The journey to her sister’s will be tragic and her eyes will see things her heart will never forget.

Both women are going to be forced to make decisions and choices that will forever change their lives.  They are so very different from each other, Hannah resents Viane as she believes her sister left her behind years ago.  Both women will follow very different paths, but both of them become heroes in their own way. They find an inner strength buried deep in their souls that even they aren’t aware exists within them.

Viane struggles to keep her family together and her home safe.  Hannah is fighting those inner demons by fighting for a cause and putting her life on the line.

The Nightingale brings the war to life, in ways many of us don’t realize or have buried.  We all know the stories, but the book shows us the barbaric actions, the evil that can exist in the souls of men, brutality and the immense hardships that the people lived through during the war.  Through it all, The Nightingale becomes a story of heroism, re-connection, forgiveness, hope, bravery and survival.

The book will stick with you for a very long time, long after you have read the last page and put it down.

Read it! Once you have, please come back and share your thoughts with me.  It is always more fun to chat about a book with someone who has also read it, in a way an online book club.