Menu
The Rainbow Comes and Goes; A Mother and Son on Life, Love and Loss by Anderson Cooper and Gloria Vanderbilt – Bee Readin' Skip to content 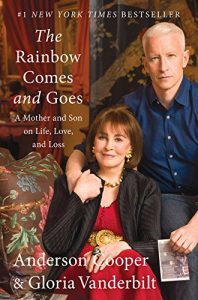 The Rainbow Comes and Goes; A Mother and Son on Life, Love and Loss by Anderson Cooper and Gloria Vanderbilt

The Rainbow Comes and Goes is a beautifully written, powerful and honest book of conversations through correspondence between a mother and her son.

Anderson Cooper who lives a busy life, as a journalist calls to check in with his mom last minute as he boards a plane to leave on assignment.  He is surprised to discovers that at age 91, she has been quite ill. Feeling guilty, and extremely concerned he battles with the thoughts of he should get off the plane and go straight to her, and the responsibility of his job. She tells him he must go, but it stirs something inside of him.  His mom isn’t getting younger and he needs to do more to understand her.  The two start a conversation in talking about some very difficult and personal times in their lives.  Anderson wants to learn  and understand more about his mom’s fascinating, yet tragic at times life. She wants to hear his thoughts and feelings on things that happened in his childhood. Tragedies and struggles they brushed aside and neglected to talk about or deal with. The time is now.

I have always had a great respect for Anderson Cooper.  He seems like a nice guy, down to earth and not one to use his heritage or name to his advantage.  He is very private, yet honest, kind and lives a life of integrity.

Throughout the conversations with his mom he asks the tough questions, but the right questions to keep the conversation going.  He wants to know more, understand more and learn of her thoughts and feelings of her life.

She tells of the tragedies of her childhood; the death of her father, an irresponsible mother, the fight over her custody. Money and fame certainly doesn’t buy security and happiness.  She is open and honest about her marriages, children, dealing with the loss of a child.  Anderson gains a deeper understanding of his mom. Their relationship is richer and the bond stronger because of the tough conversations.

Growing up we all look at our parents as just parents.  We don’t realize they are people too.  People with hopes, dreams, and fears.  They have all lived with their own tragedies that have defined who they are.  As children, we don’t understand what the struggles were or are and what has happened to create the people they are.  Anderson really does gain a great knowledge of Gloria Vanderbilt the girl, the woman, the artist, the mom, the wife and her struggles.

I couldn’t put the book down, couldn’t wait to get back to it and join in on the private conversation to see where the book would lead.  My hats off to Anderson and Gloria for sharing their private stories, thoughts and conversations.  It encourages the readers to do the same with their parents if they still can.

On a personal note, it has been a while since I have blogged a book I read, but it doesn’t mean I haven’t been reading.  Since we last visited, I read the book by Jojo Moyes “Me Before You.” I had seen the movie, okay, I’ll be honest, I’ve seen the movie several times and love it.  Thought it would be fun to read the book and see how different it was from the movie.  It is, as all books and movies are, but the book was great, I highly recommend it.  I also finished “A Better Place to Be” by David Wind.  He wrote this book based on the lyrics from the Harry Chapin song by the same name.  Another beautiful, but incredibly sad story.  Without spoiling the story for you, the story follows the path of a man struggling to find his place in this world after the loss of love.  “A Better Place to Be is another well written book.  Lastly, after those two I needed something a bit light-hearted and with my love for Lucille Ball and I Love Lucy, I read Love, Lucy by Lucille Ball.  She wrote this memoir and didn’t tell anyone about it. Her daughter, Lucy discovered it after her death among her private papers.  It is such a fun read and a page turner.  Lucy tells of her life, meeting Desi Arnaz, their marriage, family and the building of their careers.

I recommend them all. Each one is very different, but all very well written. Let me know if you read any of the books and what you think.

2 thoughts on “The Rainbow Comes and Goes; A Mother and Son on Life, Love and Loss by Anderson Cooper and Gloria Vanderbilt”