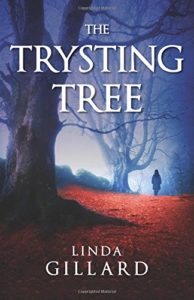 The Trysting Tree by Linda Gillard

We all have our favorite authors, books and genres we love to read.  Have you stumbled upon a new book, by an author you don’t know and in between the covers and on the pages you find magic?

The Trysting Tree by Linda Gillard is one of those books for me.  I stumbled upon this book, had never heard the author’s name or any of her 8 other books, but was intrigued by the cover, did a little research and was even more intrigued.

What I discovered is that Linda Gillard lives in Scotland; she has been an actress, teacher, journalist and author.  She is one very creative woman and has won several awards for her books.

Trysting means an agreement, (as between lovers) to meet.  An appointed meeting place.  I hadn’t thought about that word in years, but was really curious as to what this Trysting Tree would mean and symbolize in the story.

The Trysting Tree is a well written story of intrigue, mystery and century old secrets buried within the trees.  The story weaves in out of time periods, but not in a way that you can’t easily follow along.

The story is told of 4 women, all who carry deep secrets and one beech wood tree that holds the key to the mystery.

Ann, the daughter of an eccentric painter named Phoebe Flint.  Ann is divorcing and the complicated relationship of mother and daughter is like a rubberband, stretched so tightly that at any moment it may snap. But when Ann learns that her mother is sick, she feels the need to go and help her.

Phoebe and her husband, Ann’s father, purchased The Garden Lodge which was the head gardener’s cottage on the Beechgrave estate. Ann has grown up in this house and feels a connection to her father her. When Ann sees how sick her mother is she pushes her mother to understand that she needs to sell the house as she can no longer take care of the property.

As the property is put up for sale, a stranger comes knocking at the door, but is he looking to buy the house?  His curiosity runs deeper than the buildings and he is digging for the truth, the buried puzzle pieces to his life.

As Linda Gillard brilliantly weaves the story back in time to Ivy’s life on the property during war times and Hester’s life as a daughter feeling the pressure to marry, secrets are spilled, connections are made, the puzzle pieces slowly being uncovered and falling into place, but not before shocking memories come flooding back, changing the lives of those that live and have lived there.

You have heard the saying “if these walls could talk”, and in the Trysting Tree, the voices of the trees occasionally speak, and when one in particular falls, more secrets will be discovered.

I thoroughly enjoyed The Trysting Tree, am so glad to have discovered Linda Gillard’s writing and believe you will find the writing and story compelling.