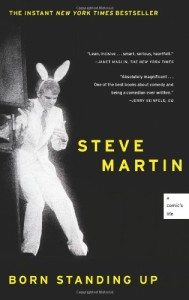 Born Standing Up: A Comics Life by Steve Martin

I hope you all had a beautiful holiday season and had some quiet time to read.

I had hoped to get a couple of books read and finished, it just didn’t happen.  I was lucky to have had time to read our January book club selection and what a fun read it was.

If you grew up in the L.A or Orange County California area, you will find the book even more fun as you read about his jobs at Disneyland and Knott’s Berry Farm, it will bring back fond childhood memories.

This Wild and Crazy guy gets a bit serious as he briefly tells of his childhood, his parents, the jobs he held that inspired his career and how he worked tirelessly to make his dream become reality.  Starting with his job at Disney and the Magic Shop,  performing at the Bird Cage theater at Knott’s Berry Farm;  opening for small bands, doing stand-up in tiny little clubs and landing a writing job on the Smother’s Brothers comedy show.

His road was not an easy one, and when you read his story I believe you will be inspired. Having what you want in life doesn’t come easy, it takes hard work, dedication, determination and connecting with people who make you a better person.  Steve Martin is brutally honest about his shortcomings, his faults and what it took to find his comedic voice.  The painful results he felt after appearing on stage and on Johnny Carson, were crushing to him, yet he stood up and plowed on.

He succeeded and has such talent as an actor, comedian, writer and musician and is genuinely a great man.

The book was an easy read at 208 pages.  Born Standing Up, is a beautifully written, fun story of someone who has made us all hold our sides laughing while tears streamed down our face, smile, cry, appreciate and respect his many talents.

Book Club was a cloudy, rainy night and our hostess warmed our souls with a beautiful Butternut Squash soup, a light salad and homemade honey bread that filled the house with this warm, sweet honey scent.  It melted in your mouth and we simply couldn’t stop eating it every morsel on the plate.  We watched a montage of favorite Steve Martin videos that us laughing.  Some did a short stand-up comedy act, which isn’t easy to do even in front of friends.  It was a night filled with amazing food, laughter, friendship and a great appreciation for Steve Martin and what he has added to our lives.

I will see you back soon with new books, reviews and book club ideas.

2 thoughts on “Born Standing Up: A Comics Life by Steve Martin”