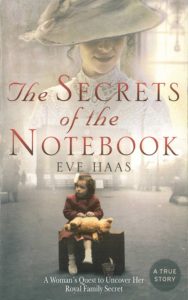 The Secrets of the Notebook by Eve Haas

If you are naturally curious, are an avid genealogist or simply love historical non-fiction, this book is for you.

Eve escapes to London from Germany with her parents and her brother. Hitler is in power and the family is Jewish. One morning, over breakfast, Eve, her father and mother are sitting around the table, their nerves rattled from a night of air raids. Eve’s father pulls a metal clasped journal from a tattered envelope. He explains to her that she must treasure the journal and keep it safe. The writings within its pages prove their lineage back to a Prussian prince. But he also warns her not to research the family, just let it lie quiet, she wonders why?

Eve remembers the journal, it is never far from her mind, but her parents have tucked it away for safe keeping and life marches on. Eve’s Uncle and his family have escaped from Czechoslovakia and Hitler’s regime settling in London. Sadly, Eve’s grandmother Anna refused to leave and settle in London with her family. Leaving her behind, Eve thinks of her daily, misses her terribly and looks forward to the letters that sporadically are sent. Without warning, the letters stop coming and the family is tortured as to what has happened to her, but there is nothing they can do to find her.

As the years pass by, Eve marries, raises three boys, but her grandmother is never far from her daily thoughts. Both of her parents are gone and the journal is in Eve’s possession. Once her boys are grown and out of the house, her husband retires, and she looks for something to fill her days. She pulls the journal from the envelope and quickly becomes so entranced with what she reads, she is determined to ignore her father’s warnings but instead, discover her father’s lineage.

The journal leads Eve and her husband on an unforgettable journey. They travel to to West Germany, cross through Checkpoint Charlie and behind the wall of communist East Germany in search of her families documents. What Eve learns answers questions, but raises many more. Her obsession and curiosity along with her strong determination and bravery will give her the pieces she needs to put the puzzle back together. Along the way her husband is blackmailed, their hotel room bugged and roadblocks set them back. But she isn’t deterred and with full force she continues on her search.

What she finds will answer her questions, re-define her family through a cover-up that leads to an unnecessary tragic end to her grandmother’s life.

I couldn’t put the book down. Being one of those curious genealogists I understood Eve’s determination and her refusal to take no for an answer. The Secrets of the Notebook is a beautifully written real life story that I believe you will love. I recently discovered the book is being made into a movie slated for release in 2022 and am thrilled.

Until next time
Bee Readin’
Terri

16 thoughts on “The Secrets of the Notebook by Eve Haas”