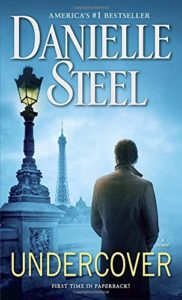 Undercover, A Novel by Danielle Steel

December is flying by too, and Christmas is coming fast.  I have read some great books this year, and then there is always a dud or two thrown into the mix, but it is all good.  I hope you have read some you love and they are still with you long after the book has been finished and closed.  Please feel free to share some of your favorites, I’m always looking for a great book.

After reading a few fantastic books that were deep and heavy it was time for some fun reading, so bring on another Danielle Steel book, Undercover.

Undercover was very different from her other books and I loved it!

The book starts with the story of Marshall Everett, a DEA agent.  Marshall has infiltrated a dangerous drug cartel, and has been living deep in the jungles of South America with them for 6 years.  His life as Pablo Echeverria has become normal and he struggles to remember who Marshall Everett is, and what his life was before this job.

Marshall’s true identity has been leaked and he is yanked from the drug cartel and whisked back to the United States, but what has been left behind?  When Marshall discovers what has happened when the DEA moved in and the lives of those he loves, he is destroyed.  He is put into a desk job to help him recover and he just doesn’t fit in, but he isn’t fit to go back undercover either.  Marshall is moved around and put into a new position with the Secret Service, a job he learns to enjoy, but it isn’t a passion. Undercover is the only life he knows and wants, but an accident changes his life again forever.

Ariana, the daughter of a wealthy man who has lost his wife and is truly lost, is also struggling to find his way.  He is asked to become an U.S  Ambassador in South America.  Ariana has graduated college, is dating someone, having fun and loving her job in fashion; but her life takes a turn when her father expects her to give it all up and accompany him to South America.  She reluctantly goes, finds friends and a purpose in Argentina, until one fateful day when her life will change unexpectedly.

Ariana and Marshall’s worlds will collide in a beautiful European city where they both go to heal.  Ariana’s past will come back to haunt her and Marshall steps in to help a stranger, taking both of them to a life undercover, but will they have a future?

Danielle Steel has a way of pulling you into the lives of her characters and you want to just live there like a fly on the wall, turning each page until you realize you have finished the book at 1 am. Have fun!

I hope you enjoy it!

Until next time,
Bee Readin’,
Terri