Menu
After You by Jojo Moyes – Bee Readin' Skip to content 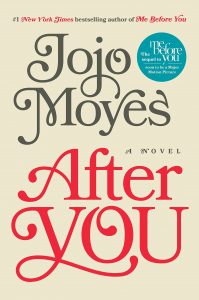 After You by Jojo Moyes

How many of you read the book or saw the movie Me Before You, starring Emilia Clarke of Game of Thrones fame and Sam Clafin, who recently starred with Shailene Woodley in Adrift? The movie based on the book Me Before You truly brought the book to life. One minute you are laughing and the next tears are bouncing down your cheeks.

After You by Jojo Moyes is the second in the trilogy and picks up right where we left Lou in book one.

~ Spoiler Alert: If you haven’t read or seen the movie Me Before You, proceed with caution. Otherwise……

Me Before You ends with a leaf floating through the air. Will has said his final goodbye to his parents and Louisa, who he calls Lou or Clarke. In his final letter to her he tells her to “Push yourself. Don’t settle. Just live well. Just live.”

After You, is a beautifully written continuation. Lou is bumbling through life. She works as a server and bartender in an airport bar, is attending grief counseling and is simply lost and miserable. She fights to put one foot in front of the other, and half of her is missing. Her soul is empty, she misses Will with every fiber of her being and she no longer wears her stripey legs with pride.

One night after trying to drink her sorrows away, she takes a fall that could end her life. She tells everyone it was an accident, but many believe this was no accident and don’t believe her story that some stranger startled her. As she recovers from her injuries, a quick left turn in her life’s path brings two unexpected strangers into her life. One will turn her entire life upside down. Lou is forced to reach out to Will’s parents and she will have to face them again. The other will push her to face life without Will and to possibly find love again.

I love Jojo Moyes style of writing and her ability to grab hold of you and pull you deep within the pages of her story. She manages to do it again in After You. I felt as though I was a silent bee, flying quietly behind Lou as she navigates her new life. Her path is unexpected, yet she chooses to be brave as she struggles to just live.

Sometimes second books in a series can be disappointing. Especially when your mind and thoughts take you where you hope the characters go after you finish the book; But as you dive in, the book takes a different route, and you are left feeling empty. So I was a bit skeptical in starting After You, but I quickly discovered that the book was going where it needed to go and it was pure joy to read. I loved every single page and the entire journey the author took me on.

As soon as I closed the book, I opened the third one in the trilogy, Still Me and I can tell you, so far it is great! I am now buried deep within the pages and will be back with you soon to close out the trilogy and share my thoughts on the final book. I really hope you will give the series a try, it has love, heartbreak, mystery, joy and bravery in finding how to life to live well after loss.

2 thoughts on “After You by Jojo Moyes”