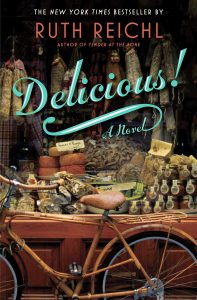 Delicious is a novel written by food critic and former Editor in Chief of Gourmet magazine, Ruth Reichl. This novel is the first piece of fiction written by Reichl and it doesn’t disappoint.

Billie, is a young woman who has an incredible palate and a love for cooking. She has lived her entire life in the shadow of her older sister, and struggled to find her own identity. When a business venture with her sister abruptly ends Billie leaves California and her family behind. She moves to New York City where she finds work at foodie magazine, “Delicious.”

Billie’s boss sends her on an errand that turns into a scavenger hunt of sorts and she meets Sal, the owner of Fontanari’s Deli and other owners of treasured foodie spots around New York. Billie settles into her job and loves the historic mansion in which she works, with its test kitchens and people who share her passion for food.

Just as Billie is finding her way, she works full time for the magazine and is working part time for Sal in the Deli on weekends. Billie is making new friends and loving her life in the city when, the magazine suddenly closes its doors. The parent company asks Billie to stay on alone in the mansion to handle the customer service calls and she agrees.

While exploring the mansion alone, she uncovers a hidden and secret room where she finds letters written during World War II. The letters are from a young girl, Lulu Swan and addressed to culinary genius James Beard. To uncover each letter, Billie must solve a puzzle, to find where the next letter is filed. Each letter sends her deeper into the lives of these two people and she can’t rest until she uncovers the story behind them and the outcome of the girl who wrote them.

I was excited and curious when I saw Delicious coming out and wondered how Ruth would do writing a story of fiction, and honestly she knocks it out of the park. I couldn’t put the book down. The character development is great, the characters are interesting, quirky and fun. She has pulled from her own life experiences to tell the story of Billie. Delicious is a story of a young woman finding her way out from under her sister’s shadow, coming to terms with loss, her love of food; the New York foodie culture, mystery and wacky characters.

I have read several other books written by Ruth Reichl and truly loved each and every one. Garlic and Sapphires, is pure joy to read. Ruth tells the stories of her journeys around New York City while working as a food critic for the New York Times. The disguises she uses to hide her identity are hilarious and her experiences fascinating. Tender at the Bone and Comfort Me With Apples, both are fun reads. They are interesting, and you discover more about her life, how she got her start in the business and how hard she worked to achieve success. The recipes she shares in the books are an added bonus. I have tried several and they are amazing.

Enjoy Delicious and until next time,
Bee Readin’,
Terri

2 thoughts on “Delicious by Ruth Reichl”