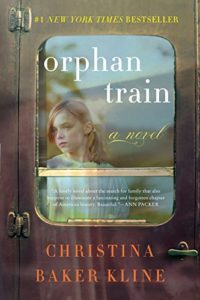 I just finished the Orphan Train by Christina Baker Kline and thoroughly loved the story.  The book was published several years ago and has been sitting on my Kindle just waiting for me to finally pick it from the list.

The Orphan Train is a historical fiction book that tells one girls story of immigration and being put on one of the orphan trains that traveled from the East coast to the Midwest, and was filled with orphaned children.  The children were taught how to present themselves to families looking for foster children or to simply use them for labor on their farms.  It is a part of history that I don’t ever remember learning.

Molly, a young teenager, has been bounced from foster home to foster home. She feels that she doesn’t belong anywhere and is completely alone.  She dresses in Gothic style clothes and lots of dark makeup which annoys her foster mom.  Molly feels the resentment and utter dislike that her foster mom feels for her, it hangs in the air like a thick dark cloud.

At her newest high school, Molly has no friends and she keeps people at arms length.  She meets Jack who is intrigued by her and he fights to break through the solid shell that Molly has built around herself.

Vivian, a graceful woman in her 90’s, lives alone in a very large home.  She has suffered more heartache in her life than one should have to endure.  Her life is a secret and so much of her past has been locked deep within her soul,; stories she has never spoken about.  Vivian employees a caretaker, housekeeper named Terry, who happens to be Jack’s mom.

When Molly takes a chance on Jack and lets him in, she has no idea how that one decision will change her future.

She attempts to steal her favorite book from the library. Molly has no money and no means of purchasing the book. When discovered, her case worker is called in to help with the problem and Molly is tasked with community service.

Jack wanting to be Molly’s saviour, he asks his mom, Terry if Vivian has any work for Molly to do to help her complete her community service.  Surprisingly, Terry offers her help and sets up an interview between Molly and Vivian. Vivian is drawn to Molly and makes the choice to have her help clean the attic.

From the moment Vivian meets Molly she realizes there is something broken within Molly and she understands that hurt. The two have a lot in common and she wants to help.  As the two embark on the attic cleaning project, secrets slowly spill out.  The two unlikely friends discover they are more alike than they are different.  The lessons and acceptance that Molly gets from Vivian begins to change her life.  The discoveries that Vivian makes and the lessons she in turn gets from Molly once again gives her life purpose.

Orphan Train weaves from present to past as Vivian opens up about her life and what happened to her when she is put on an orphan train and then picked.  The families that take her, and her journey through life,  is one filled with heartbreak with glimpses of a little happiness sprinkled in. Vivian is forced to make some unbearable decisions throughout her life, ones that will change every fiber of her soul.

I loved everything about this story.  I was first introduced to the story of the orphan trains that operated in the U.S while reading the book The Chaperone by Laura Moriarty. The orphan trains ran in the U.S from 1854 to 1929. They were a supervised welfare program that transported nearly 200,000 orphaned, abandoned and homeless children from crowded East coast cities to foster homes mainly in  rural Midwestern towns and areas. The program ended in the 1920’s with the beginning of the the organized foster care system in America.

The story of Molly and Vivian is one of acceptance. The two spend hours in the attic going box by box and each item has a story.  Through these stories the two open up about their lives.  They learn to accept each other without being critical and judgmental.

The book was one I couldn’t put down and read it in about a day and half.  The characters have such depth and the author writes them in a way, you can’t help but appreciate and love each one for who they are, damaged or not.

I hope you will decide to read it.  If you do, please jump on the blog and let me know what you think of the story.

Until next time,
Bee Readin,
Terri