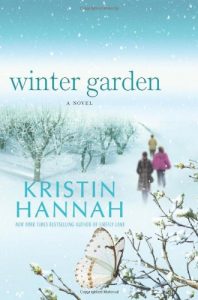 Have you read any novels by Kristin Hannah yet? Winter Garden is the perfect book to read this winter, curled up under a nice fuzzy blanket.  Let yourself fall into the pages of this book, I promise you won’t be able to put it down.

I first discovered Kristin Hannah’s books through book club several years ago and am working my way down through all of her 20 + novels. She writes so vividly and in color that you feel as though you are sitting in the novel with the characters.

After finishing Winter Garden, I just couldn’t wait to share this book with you.

“Can a woman ever really know herself if she doesn’t know her mother?”

This powerful novel is about the relationship between a mother and her two daughters. Anya is a cold fish of a mother.  She really shows no love or affection to her daughters.  Any kindness Anya carries within her soul is only directed to her husband.  She is so detached from her children, that Alex, their father steps up to be both mother and father.  He struggles to make up for her shortcomings, but always defends her to the girls and they wonder why?

Alex owns and runs a very well known apple farm in the state of Washington, and Anya tends to her garden.  Meredith and Nina are close and as sisters talk about the coldness of their mother.  They both have struggled and fought throughout their childhood to get their mother’s love and attention to only have it thrown back at them, so over the years they quit trying.  The only time they feel any closeness to their mother is on the occasional nights she sits with them to tell them her Russian fairy-tale story, which appears to have no end.

As the girls grow, they have also given up on the fairy-tale story, and go their separate ways.  Nina leaves home and becomes a very well known photojournalist traveling the world and photographing the struggles of women in war zones and poverty.

Meredith marries her high school sweetheart, raises two bright and beautiful daughters and chose to live close to home to help her father with the farm and apple business.

Life sometimes crumbles when you least expect it and that is what happens for Anya, Meredith and Nina when Alex unexpectedly falls ill.  Nina works her way home and on his deathbed Alex forces a promise from his 2 daughters to get to know their mother.  From Anya, he forces her to promise to tell her Russian fairy-tale one last time, to the end this time.

Anya begins to unravel with the loss of her beloved Alex and Nina is forced to come back home to help Meredith. But then, vodka and dinner, Anya struggles to tell the story. Through her own words, meltdowns and struggles, her two daughters will learn of their mother’s life and the tragedies that have forced Anya to wall off her soul. She fights to let the horrific tragedies that filled her life and the one heartbreaking, deep dark secret out.  Once the secret is out and the story finished, their world is rattled, shaken and tested so deep down to their cores, that they are forced to face who they think they are and who they will become.

What I love about Kristin Hannah’s novels are the threads she weaves into each story of strong, unbreakable women.  The power of their relationships and bonds so tightly woven nothing will allow them to break. Through heartbreak, loss and secrets, they all hang in together and come out the other side, maybe changed, but better.

Yes, through tears and laughter, I finished this novel and just couldn’t put it down.  I hope you read it and enjoy it!

You may want to pick up and read The Nightingale also by Kristin Hannah before the movie is released next year.  It is slated to come out sometime in August of 2018.  The Nightingale is also another amazing book.  I did blog this book a while back if you are interested.

I hope you all have a beautiful Thanksgiving. May it be a day celebrating with friends, family or maybe both; life’s many blessings and the people who make us who we are.

PrevPreviousOrphan Train by Christina Baker Kline
Next10 Most Favorite BooksNext