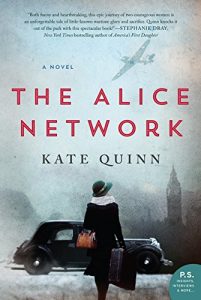 The Alice Network by Kate Quinn

The Alice Network is a beautifully written historical fiction novel.  The story knits together 3 lives, the tragedy of war and the all woman spy network that operated in Europe during the war seamlessly.

The story weaves back and forth between 1947 and 1915 to tell the story of Eve, a woman who was embedded as a spy in The Alice Network during the war, and Charlie, a young pregnant teen in 1947 who is looking for her cousin Rose who disappeared during the war. Finn, helps Eve with her day to day life. She lives in depression, alcoholism and demons from her work as a spy.  When Charlie shows up on Eve’s doorstep, Finn, Charlie and Eve’s lives will be forever changed.

I loved this book and here is why…..

I thoroughly enjoy historical fiction, when a writer can seamlessly weave true history into a fiction novel.  I knew nothing about the Alice Network that operated during the war, and as soon as the book was finished, I had to sit and google it.  What I found was so interesting and added to the story.  Really unbelievable, these woman were incredibly brave, tough, determined and deserve so much credit and recognition for their contributions to passing on valuable information regarding the German soldiers.

Without spoiling the story for you, here is what I want to share.

1947, Charlie St. Clair is pregnant, and unmarried at the age of 19.  Her socialite parents want her to just get rid of the little problem so shame is not brought to the family.  She travels with her mother to Europe first stopping in France, before the appointment in Switzerland.  It is in France where Charlie escapes from her mother’s clutches and travels alone to England in search of Eve, who she believes may have known her cousin Rose who disappeared during the war.

1915, Eve is young and working as a female spy during the war.  She has been working for The Alice Network which was a secret spy network made up of all women to obtain information on German troops and relay the information to England.

When the two women meet, Eve is battling serious demons, trauma, depression and alcoholism and refuses to even speak to Charlie.  But the two finally have a conversation and with Eve’s employee, Finn, the 3 set off on a journey in search of Rose. Eve will be forced to face her demons, her past, and her trauma in search of what could be a better life.

The book is so well written, I simply couldn’t put it down.  The characters are well developed, interesting and deep.  I found myself really not liking the character of Eve. With Kate’s writing, I really started to understand her trauma and was truly pulling for her, Finn and Charlie in the end.  What they discover could break them all.

The history woven throughout the novel is fascinating and added so much depth to the story.