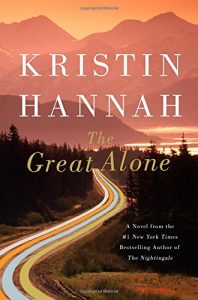 The Great Alone by Kristin Hannah

The Great Alone is author Kristin Hannah’s newest novel and the book was released on Feb. 6, 2018.  The story circles around Ernt Allbright, his wife Cora and 13 year old daughter, Lenora, everyone calls her Leni.

Ernt is a POW, home from the war, damaged and changed.  Physically he is fine, but emotionally and mentally Ernt is extremely unstable.  He is volatile, withdrawn and can’t hold a job.

When Ernt is told that a military brother who is now dead, left him his rustic cabin in the untamed wilderness of Alaska, he moves his family to the last frontier.  The family is completely unprepared for the harshness of the land and when winter takes hold, their world turns dark.  Ernt can’t handle the dark days with very little sunlight, the isolation and harshness, the lack of a job or money; the darkness within him takes hold and their world will be forever changed.

I am a huge Kristin Hannah fan and could hardly wait for The Great Alone to be released so I could dive right in.

The story is one of survival, coming of age and abuse.  Cora loves Ernt to the deepest depths of her soul, follows him anywhere and puts herself in harms way to protect her daughter, keep Ernt’s demons away and simply survive.  Leni struggles to be accepted, find friends and live a normal teenage life.

Cora and Leni will quickly learn that the Alaskan wilderness is not kind, and the man they both love as husband and father will not protect them and their survival is in their own hands.  Leni, falls for a local boy, whose father has money and her father detests him because he believes he is arrogant and shoves his money in the faces of the townspeople.  The lengths Ernt goes to to keep the world away from his family drives the family into deeper despair, and fighting to escape being trapped.  The consequences of Ernt’s decisions and those of his family will force the women to make a decision that can never be changed.

I found myself neglecting chores and reading until 2 am, because I couldn’t put the book down.  One night I kept telling myself that after this chapter it was lights out.  I finally closed my Kindle, turned off the light and laid in the dark thinking about the story and I couldn’t help myself, I turned the light back on,opened my Kindle and read for another 2 hours, it is that good.

Kristin Hannah’s books all deal with strong, brave and incredible women and this one doesn’t disappoint either.  Her writing is so vivid, descriptive and well done, I don’t think you will have an easy time putting it down either.

The descriptions of untamed Alaska and life in the back woods is inspiring.  The characters have depth, personalities and souls.

When I finished the last page, I took a deep breath, exhaled and stopped to think about the entire book, and story.  I wanted to re-read the book and grieved the fact that it was over and done.  These are all signs of a great book.  I am excited for you to read it.  I hope you will add it to your reading list, or download it to your e-reader and get started.

8 thoughts on “The Great Alone by Kristin Hannah”