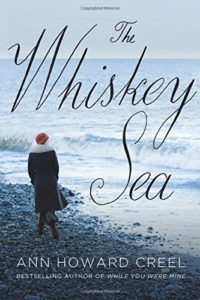 We have had so much rain in So. Cal, which we need, so I’m not complaining.  It also makes for a great reading day.  Sunday, it was pouring and I had nowhere to be, it made for the perfect day to carve out some time to finish The Whiskey Sea.

I stumbled on this book and the title intrigued me, as did the cover.  The first page reeled me in and I was hooked.  A woman is in the water, gasping for air, drowning.  What is her story?

Frieda and Bea are young, sisters, barefoot and about to be homeless.  Their mother, a prostitute living in a seaside village where she has served the fisherman of the town.  She has died, and there is no one to take the girls.

Silver, a salty clammer is single, has no family, but what he has is a silent tenderness and an open heart.  He takes the girls in, gives them a home where they feel safe and loved.

Frieda is the oldest, she takes on the role of Bea’s mother.  While  protecting her, Frieda pushes Bea to get an education and make something of herself.  Frieda follows in Silver’s footsteps, she is drawn to the sea and loves clamming with him and finds her solace on his boat. As the girls grow, Silver is aging; he tires of the sea and simply can no longer handle the difficult work. He sells his boat to Sam Hicks believing him to be a suitable husband for Frieda.  When she discovers the boat sold, she is angry and bitter. Frieda believed the boat would be her’s and she would take over for Silver.

Frieda was old enough to remember how the men treated her mother and wants nothing to do with them, she has no interest in marrying Sam.  What she does is convince Sam to teach her how to work on boats,  she struggles to be self-sufficient, wanting to  make her own money to support Bea, her college dreams and take care of Silver.

The fishermen don’t trust her as a woman. They don’t believe she knows what she is doing, which further pushes her to become the best boat mechanic she can.

Prohibition is quickly turning some of the fisherman into rum runner’s. The money is more than most of them have seen their entire life. With the new fast boats in town and a recent tragedy, Frieda will go down a path parallel to her mother’s to keep food on the table. She now has an understanding of why her mother had no choice in what she did.

The characters in The Whiskey Sea have a deep depth and are so well developed. Each are forced to make choices based on the circumstances that life throws at them.

I admired Frieda and felt the agony of the choices she had to make when forced to become the bread winner for the family.  She  has lived with a chip on her shoulders and is a tough nut to crack. Yet, Silver understands her, worries about her and is unhappy with her choices, but loves her and gives her purpose.

When Frieda starts rum running with the men, she now has the respect of the men she has fought hard to keep at arm’s length.  While her mother broke the law and let men use her for money, Frieda breaks the law to bring in money running illegal alcohol and taking orders from men to make money for her family.

The story will reveal answers to some of the mysteries that surround Frieda and Bea’s life, tugs at your heartstrings, and finds these 2 women ultimately surviving a life that has dealt blow after blow.

I loved the history of the rum runner’s and the dangers that followed them on the peaceful and sometimes tumultuous seas.

The Whiskey Sea is truly one of my favorite books and would make a fantastic movie.

Until next time, Bee Readin’
Terri

PrevPreviousProperty of a Noblewoman by Danielle Steel
NextShadow of a Century, An Irish Love Story by Jean GraingerNext

1 thought on “The Whiskey Sea by Ann Howard Creel”